In the first days in Mongolia, we had to accustom ourselves to a new regime. One without rules, timetables, and no security. What we didn’t know what to expect from Mongolia, we only know that a tourist equals money for Mongolians.

As soon as we got out of the bus in Ulan Bator, a herd of travel agents surrounded us and began to offer services ranging from accommodation to a three-week-long trip along the landmarks of Mongolia. However, we have already booked the accommodation and since we are traveling low-cost, we refuse the agents and go into the depths of the big city. Pollution doesn’t surprise us in the Asian country, the Mongols themselves often wear a mask in the capital. In Mongolia, everyone is a taxi driver, just stretch out a hand and wait for a moment. However, despite the ridiculous prices for which the Prague cab driver wouldn’t even start the engine, we are insisting that we catch a bus and eventually manage to get there.

Our original plan was to try couchsurfing in Mongolia, but most of the hosts answered that they don’t do couchsurfing anymore and switched to Airbnb instead. Every tugrik good, isn’t it? This was probably the case of our accommodation that we arranged over booking.com. The owners lived in one room of a double-room apartment and the second room was filled with twelve beds for tourists. We are glad that we were the only guests that day; we cannot image the morning one bathroom situation in case the guest house was full. 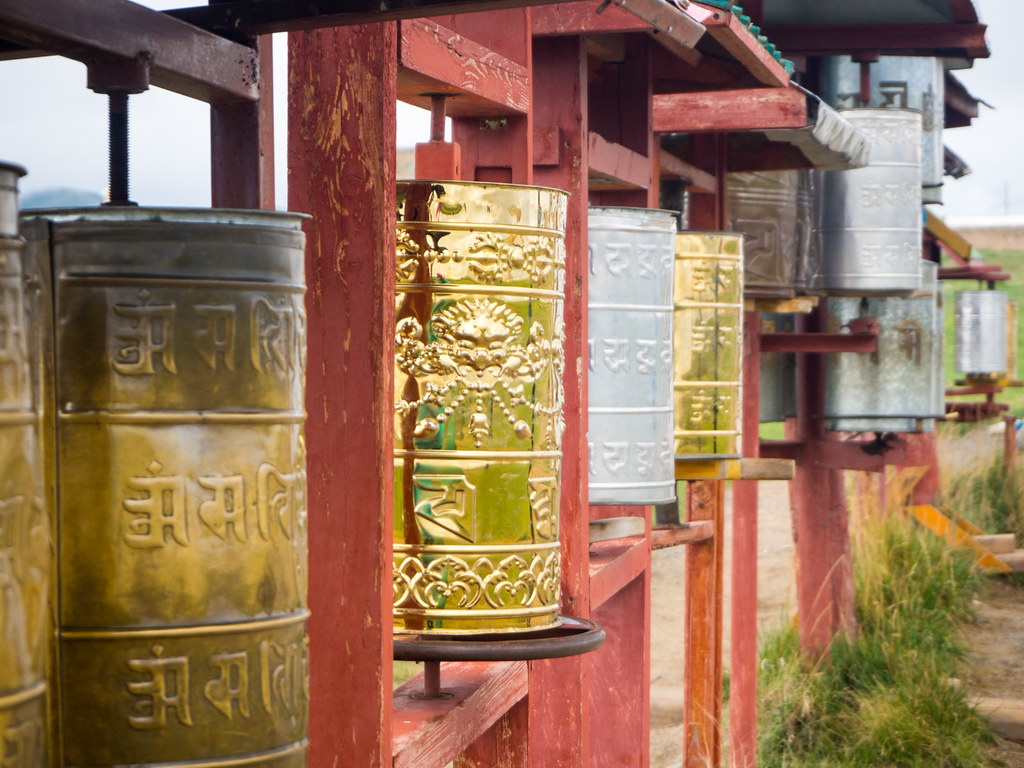 Next morning we are moving 400 kilometers west to Kharkhorin, once the main center of Genghis Khan’s empire. We have an early lunch at the station, for the first time we pick a random meal on the menu, and we regret that we didn’t order a single meal for both of us. Portions are huge. At the same time, we play the stomach lottery and decide to try traditional milk tea. It’s a bit salty, but not bad at all and luckily it does not lead to any consequences. Before we get to the bus, a young girl offers us her mother’s guest house in Kharkhorin. Coincidentally, we’ve read about this place earlier, so we already know we would head there.

A bus radio is entertaining us during a five-hour journey. The playlist repeats in hourly intervals playing national songs full of horses and old people. We slowly become accustomed to the fact that our white complexion becomes the center of attention and we start to play the game who can keep the eye-contact longer. The driver stops occasionally to deliver packages to local people from their relatives living in the capital, and they use the time, quickly get into the bus and offer various sweets, food and home products to passengers. During the break, we can feel that the Mongolians brought pit toilets to the next level. You are not going to the pit, you are going into the pit. We meet herds of sheep, goats, cows and yaks, a few camels and a lot of horses. Along the way, a carcass at different stages of decomposition emerges occasionally, sometimes crowded with crows and eagles. 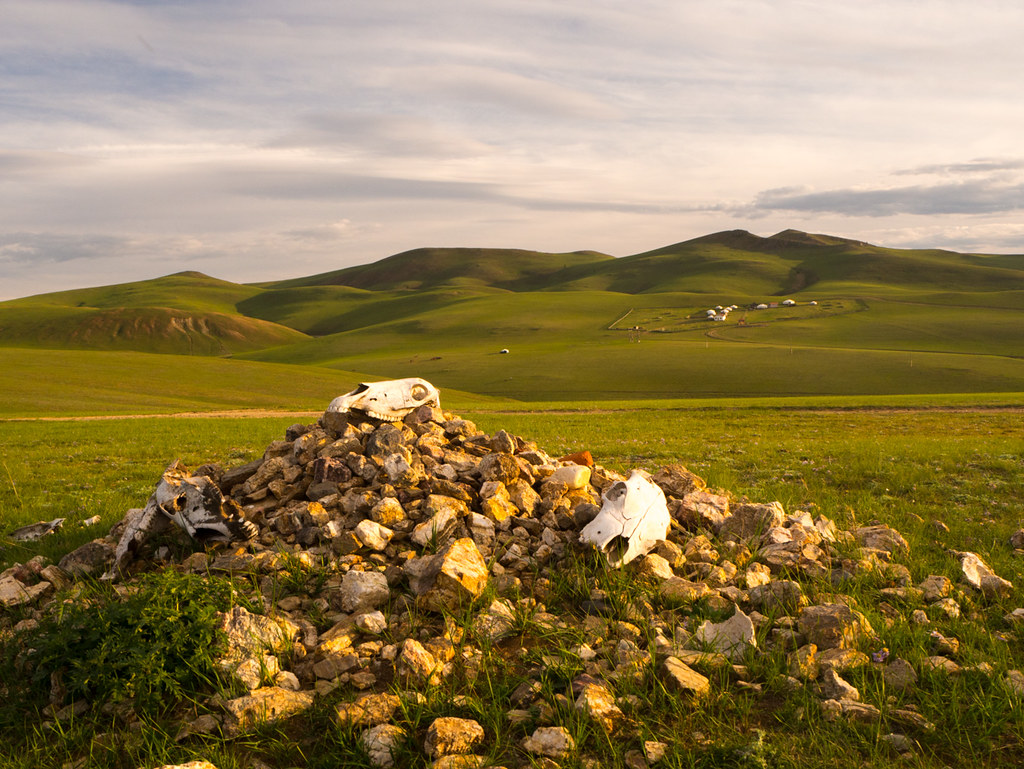 Smiling Gaya is already waiting for us in Kharkhorin. Her daughter called her and suddenly we are sitting in the back seats of her Toyota and heading for accommodation. Just on the hill behind Gaya’s guesthouse is one of the main landmarks, a stone statue of a turtle, which, as one of four, borders the territory. Not far from it, is another stonework. A giant statue of a penis which those who believe it visit to bless them with a child. 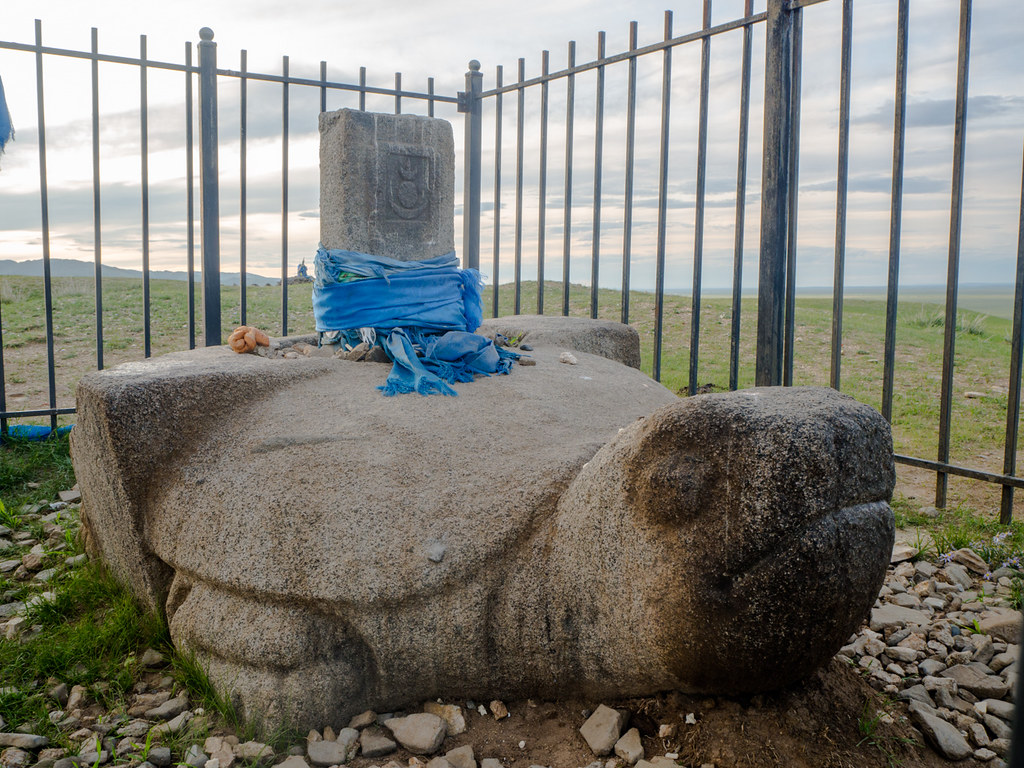 Fearlessly we build a tent and spend the night in it. Well, we are obviously not ready for the cold in Mongolian climate and decide not to sleep voluntarily in a tent again. The only result was that Dom caught a cold.

Kharkhorin’s main attraction is the Erdene Zuu monastery, one of the largest in the whole country. In his excavations were found artifacts from the times of Genghis Khan and leaders before and after him. Inside the walls of Erdene Zuu, monks still live and do their practice, summon Buddhists by trumpeting on a seashell, and whisper their mantras when they spin the prayer cylinders. Next to the temple is the second of the protective turtles and a museum that was a gift to Mongolia from the Japanese people. It is built on top of excavations and we were particularly interested in the fact that already in the 14th century they had developed a system of floor heating and even a seal that reminds us of today’s QR code. 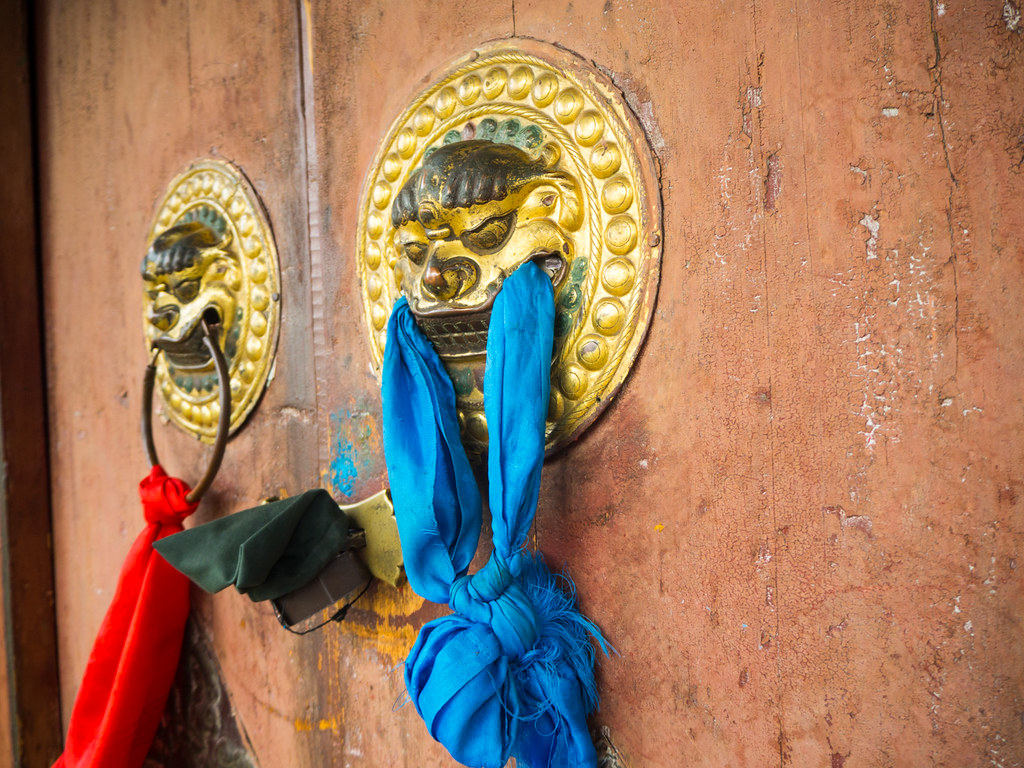 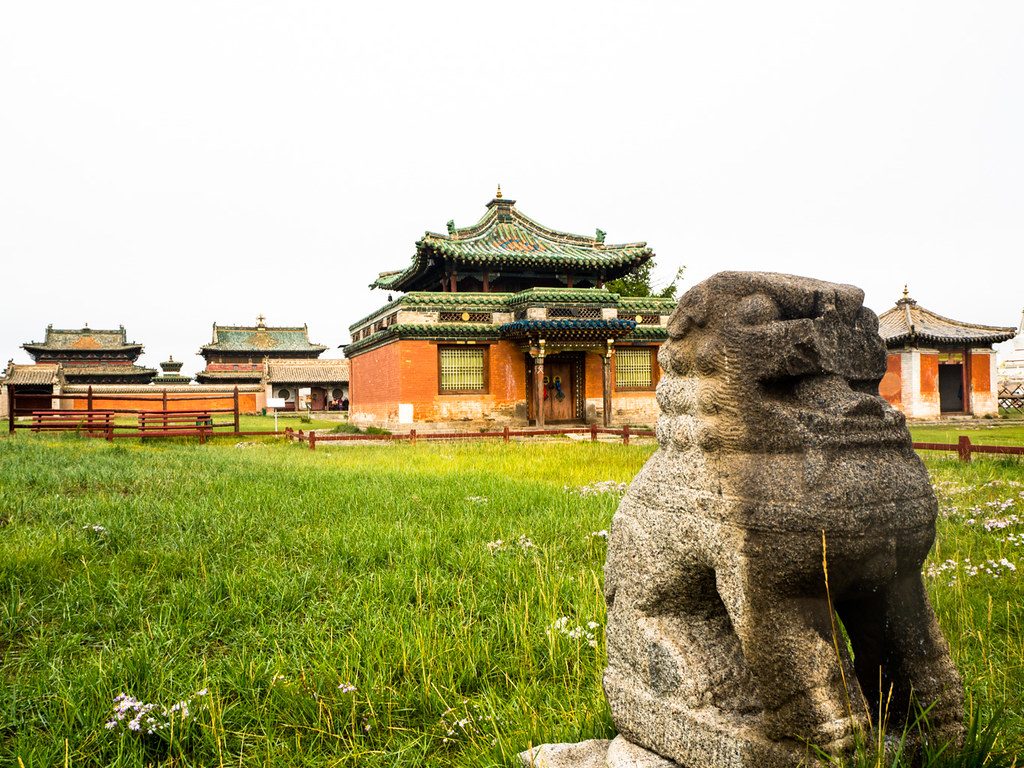 In the evening, Dom couldn’t resist Mongolian fashion and poses in the traditional robes. Be it his way, he would also wear it to a throat singing concert that takes place in one of Gaya’s yurts. 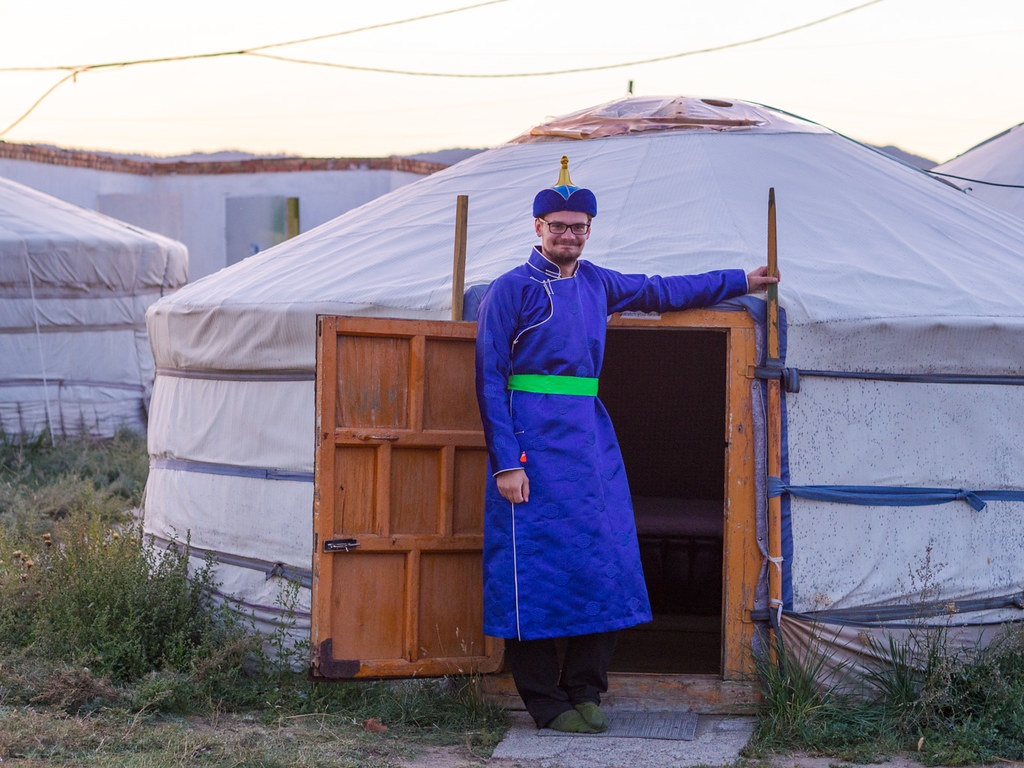 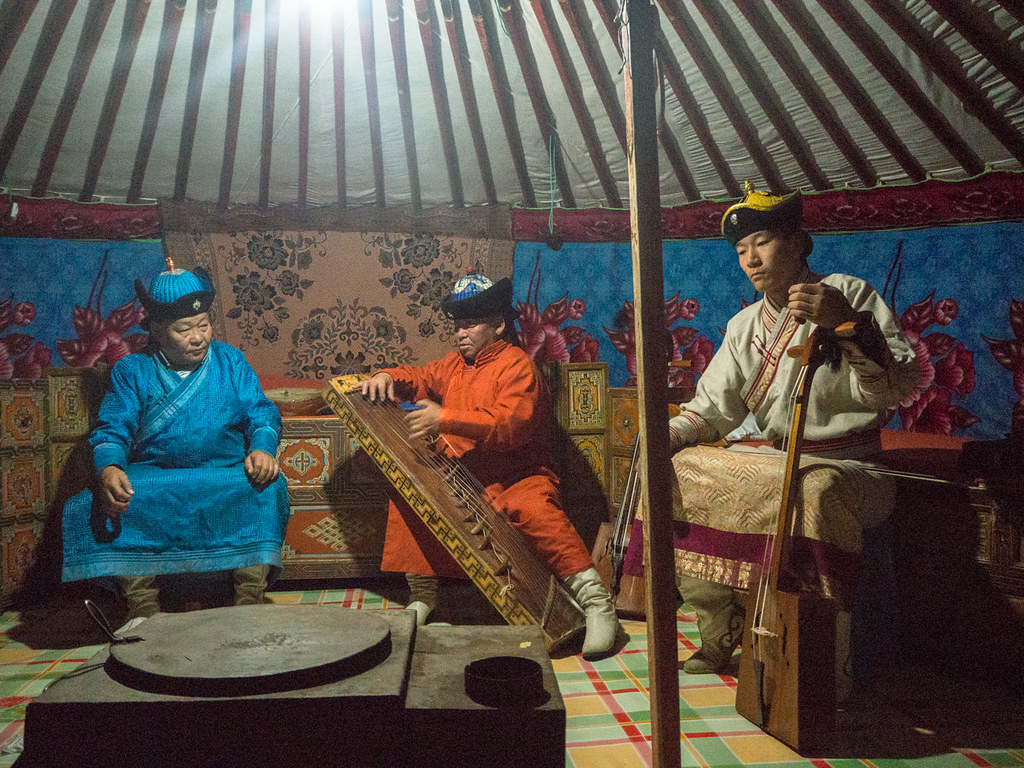