After two weeks on the road, we finally reached the waters of Baikal. The deepest lake in the world is not only a reservoir of drinking water, it is also a popular tourist destination. Especially for tourists from Russia, to whom it replaces a holiday spent on the beach. We are heading to the island of Olkhon, which is not popular only for its sandy beaches, it is known primarily as a place where people still worship the ghosts and shamans.

Hero of the evening

We get off the night train in Irkutsk, where other couchsurfing hostesses are waiting for us. Two fresh graduates from the tourist industry guide us in the city with the words: “Don‘t look there, it’s a dirty quarter. No, not that way, it’s a terrible house.” But Irkutsk fascinates us by its old houses with broken windows, fallen beams, and creaking doors. In the evening, we’re invited to a tea party to some friends, that eventually turns out to be an all-you-can-eat party. Seven twenty-year-old girls, food, and Dom. And when he gets rid off a giant hornet that flew into the room, he becomes a hero of the evening. 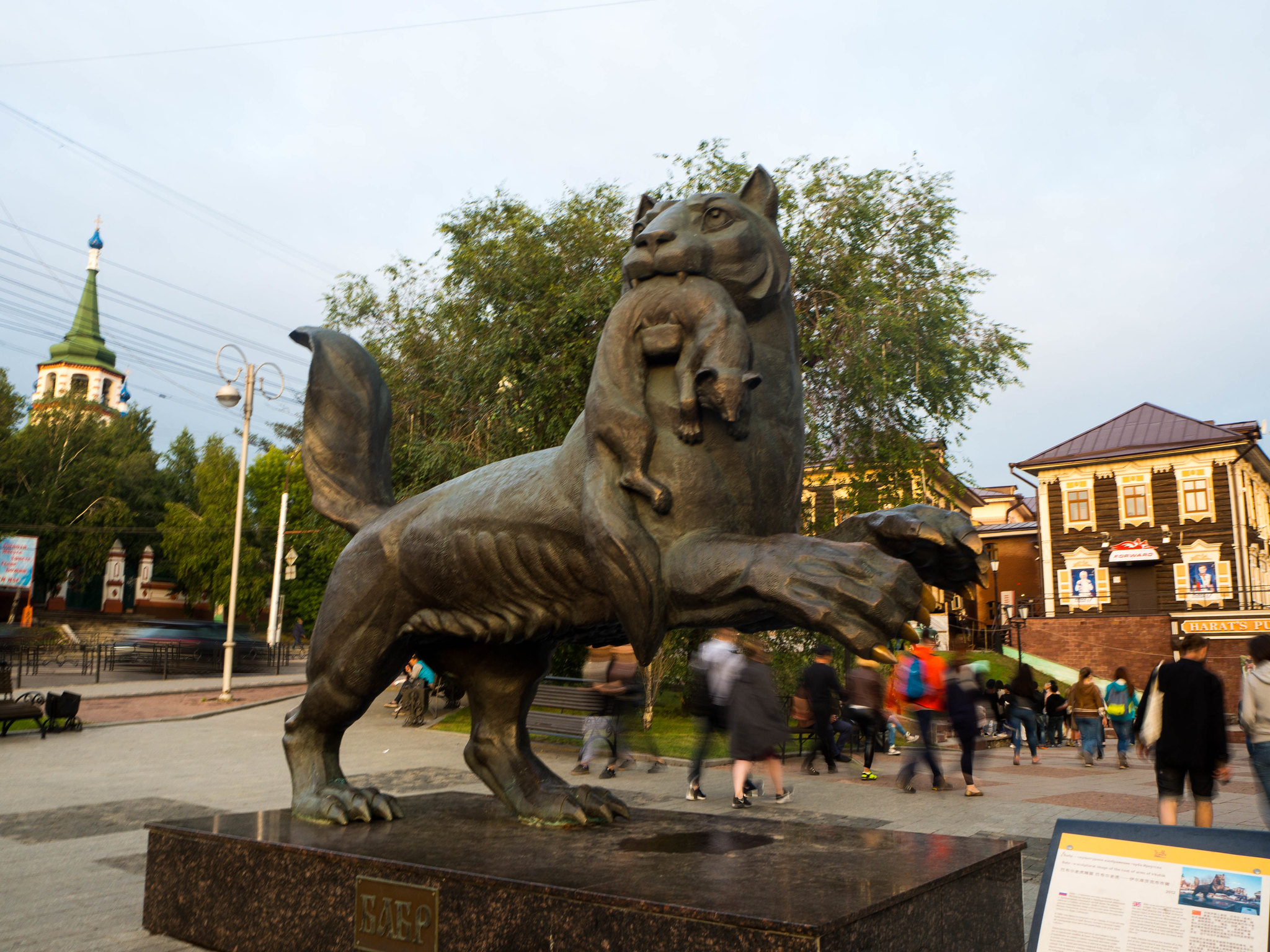 A cat called Pluto is the reason we can’t sleep at night, he obviously thinks we are his new toy. Early in the morning, we head to the bus station where taxi drivers, smiling from ear to ear, announced that tickets to Khuzir, the largest city on the Olkhon island, are already sold out. In return, we enjoy the expression on their faces when we wave the tickets that we booked in advance and go searching for our marshrutka.

The ship burned down, the lake dried up

We share the cramped space in a small van with other tourists and islanders who are destroying our plans. From Olkhon, we wanted to sail to the other shore of Baikal to the peninsula of Svjatyj Nos, but the only ferry that had connected these places is no longer operating, two years ago a fire had taken it. At the same time, we plan to visit a salt lake in the middle of the island. But a young guide just shakes her head: “There is a drought in Olkhon, no water will be found in the lake.”

But we do not want to get discouraged from our original plan. We get off before the final stop in the village of Jalga, where we enjoy warm waters of the bay called Little Sea. Water is trapped here between the island and the mainland, so it has a chance to warm up. The only difference from the Mediterranean Sea are the cows walking on the beach instead of camels. In the evening, we decide to head to the Shara-Nur lake, or at least to what is left of it. Olkhon is about 15 kilometers wide, the salt lake is in the middle. Even though there is only a white mark of salt left behind, the mosquitoes are still fond of the swamp so we build a tent and get quickly in. 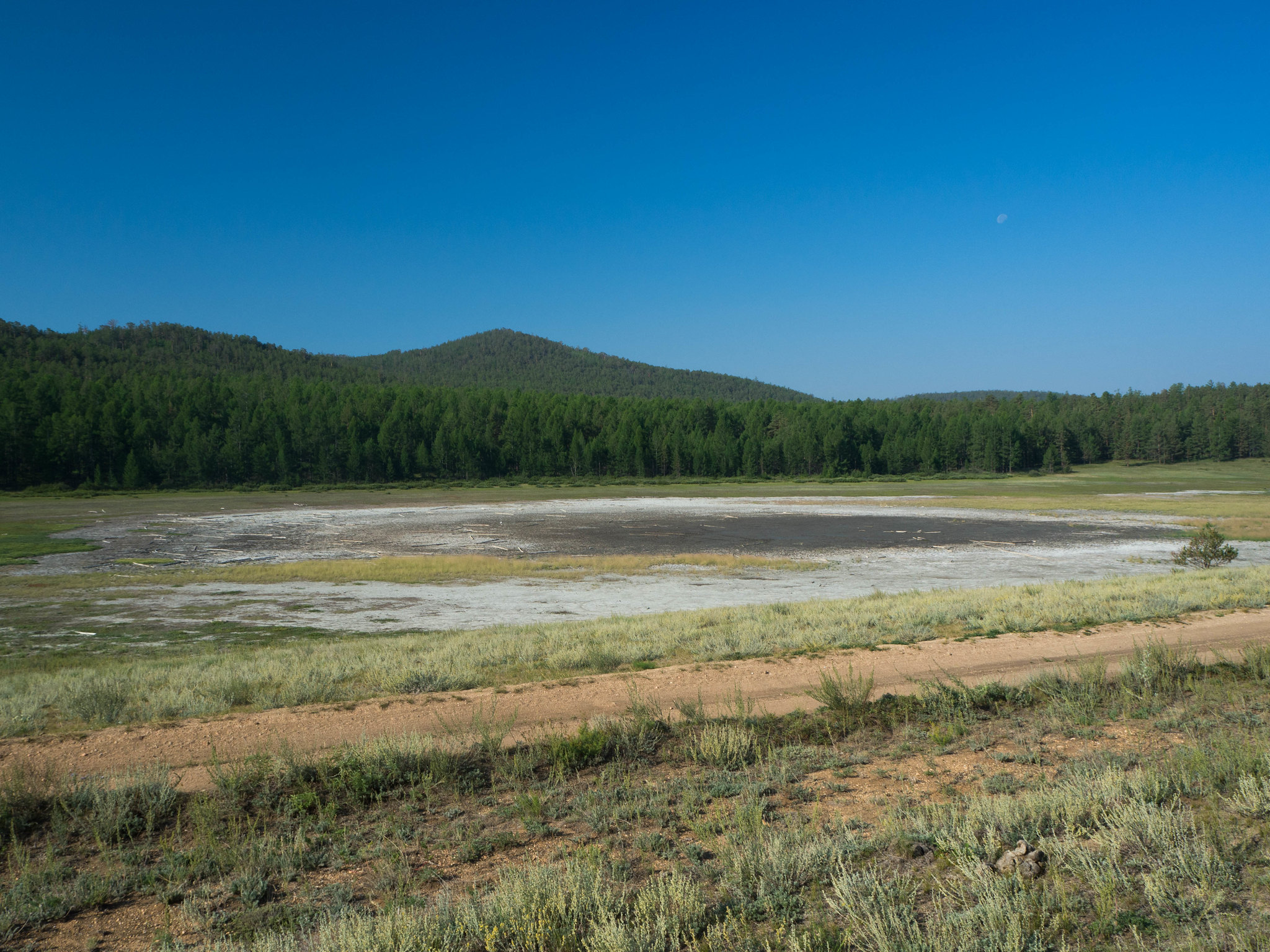 We arrive to the other side of the island to cape Pad Tashkiney. From afar we can feel the cold brought by the morning haze from the lake. Our hands are freezing from the cold water. This is the Baikal we expected. Three Russians camping nearby wave at us and invite us for breakfast. We can’t refuse meat, chocolate biscuits, and a samogonka. After breakfast, we leave our bags with campers and climb up rock above the cape. We couldn’t have chosen a better time to do it, as soon as we were up, UAZ drove into the camp. The debate between newcomers and our new Russian friends was too far to hear, but after the intruders’ departure, we found out that they were rangers of National Park checking permits. We had no idea such thing is needed, so we were glad we did not have to meet them. We bid farewell to campers and begin a 15-mile march back to the west side of the island. 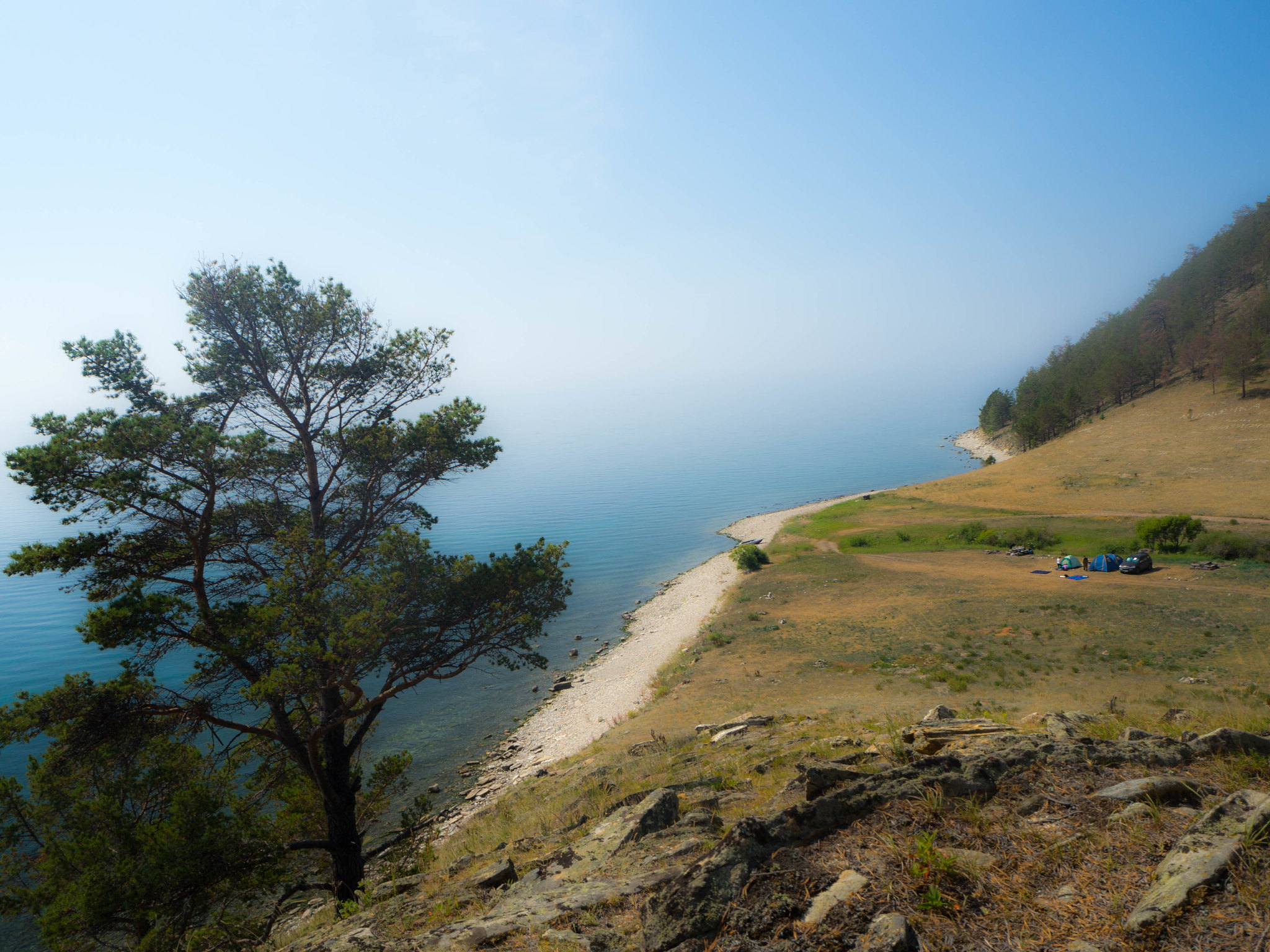 In the evening we barely feel our legs. All day, butterflies and marmots, and especially the glowing sun were giving us company. We also saw many shamanic totems, where people leave coins, sweets or cigarettes. In Khuzir, we arrange the permits and try to hitchhike to the northern cape Choboy. If we are lucky, we might be able to observe freshwater seals there. But today is not our day. Cars are either going another direction, or drivers are asking for the same amount of money as travel agencies. “Why do you think we’re hitchhiking?” I ask another driver who wants us to pay for the ride. He drives off without answering.

At noon we give up our efforts and decide to stay in town. The town of Khuzir could serve as a coulisse for western movies. A cloud of dust rises from the sandy roads under the wheels of passing cars, cows are wandering in the streets and only horses are replaced by the immortal Russian UAZes. Gray terrain cars cross the east of the country and their tuning is probably appreciated only by car enthusiasts. Most of the local people make their living from tourism, everyone is working in a restaurant, guest house or as a travel agency driver. 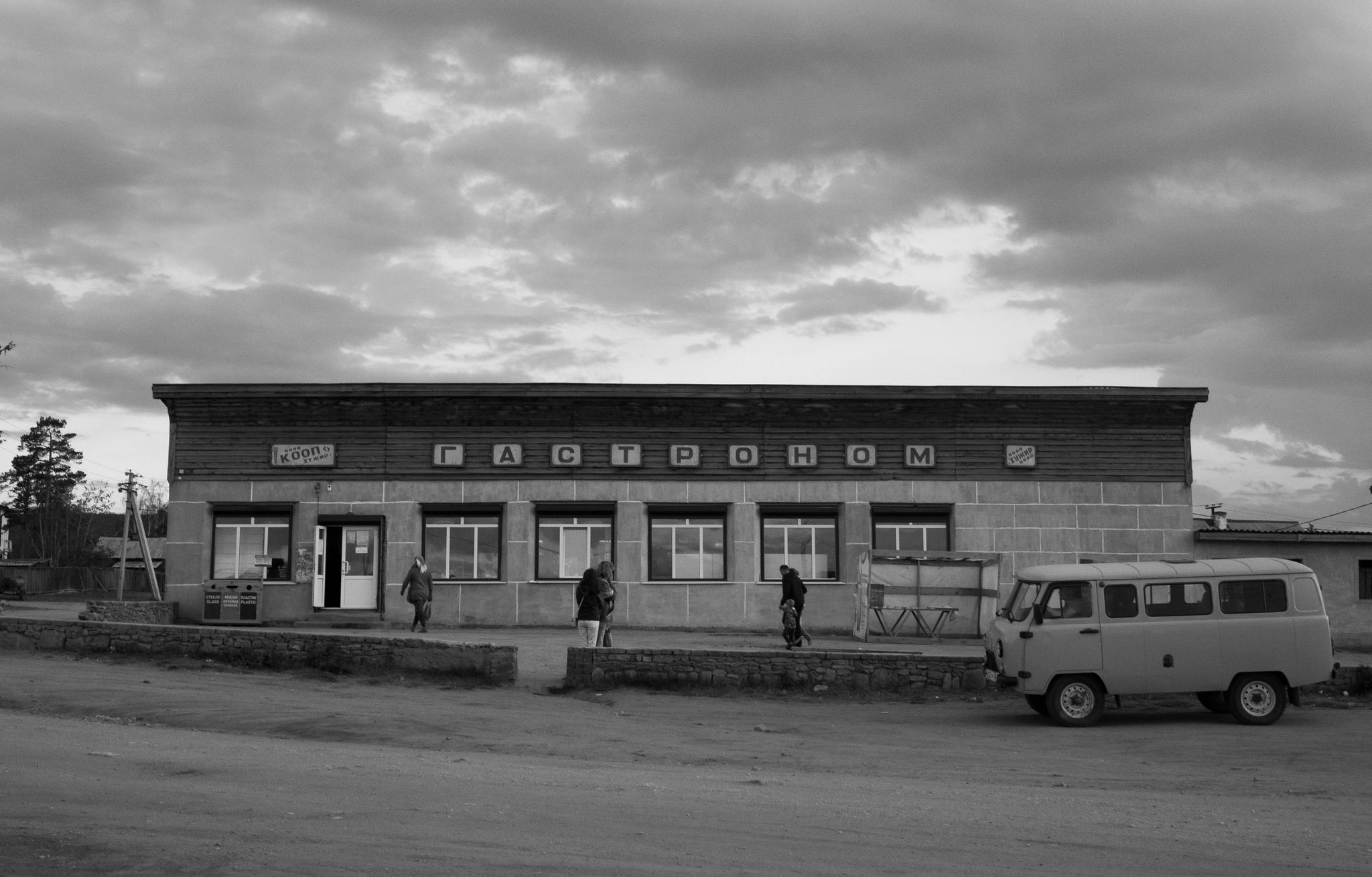 Nevertheless, the exhibition of old cars is not the reason why Khuzir is so popular. Sacred Shamanka rock at cape Burchan attracts travelers from all over the world. According to legends, ghosts that are not meant to be disturbed live there. In the past, the pilgrims even bandaged their horse’s shoes, so that they wouldn’t wake the inhabitants of the rocks. Nowadays you can meet followers of different religions there, but shamanism still has its place. The magic and ancient rituals enthusiasts gather here mainly before sunset and their drumming can be heard miles away. Shaman has a role of a healer and prophet in the community, acting as a mediator between the world of people and world of ghosts. The true shaman is also able to step out of his body to visit other worlds, he is endowed with visions, and can transform into animals. Unfortunately, we were not able to witness any of these abilities, so we at least tied a colored ribbon on one of the totems that protect the rock from the cars. 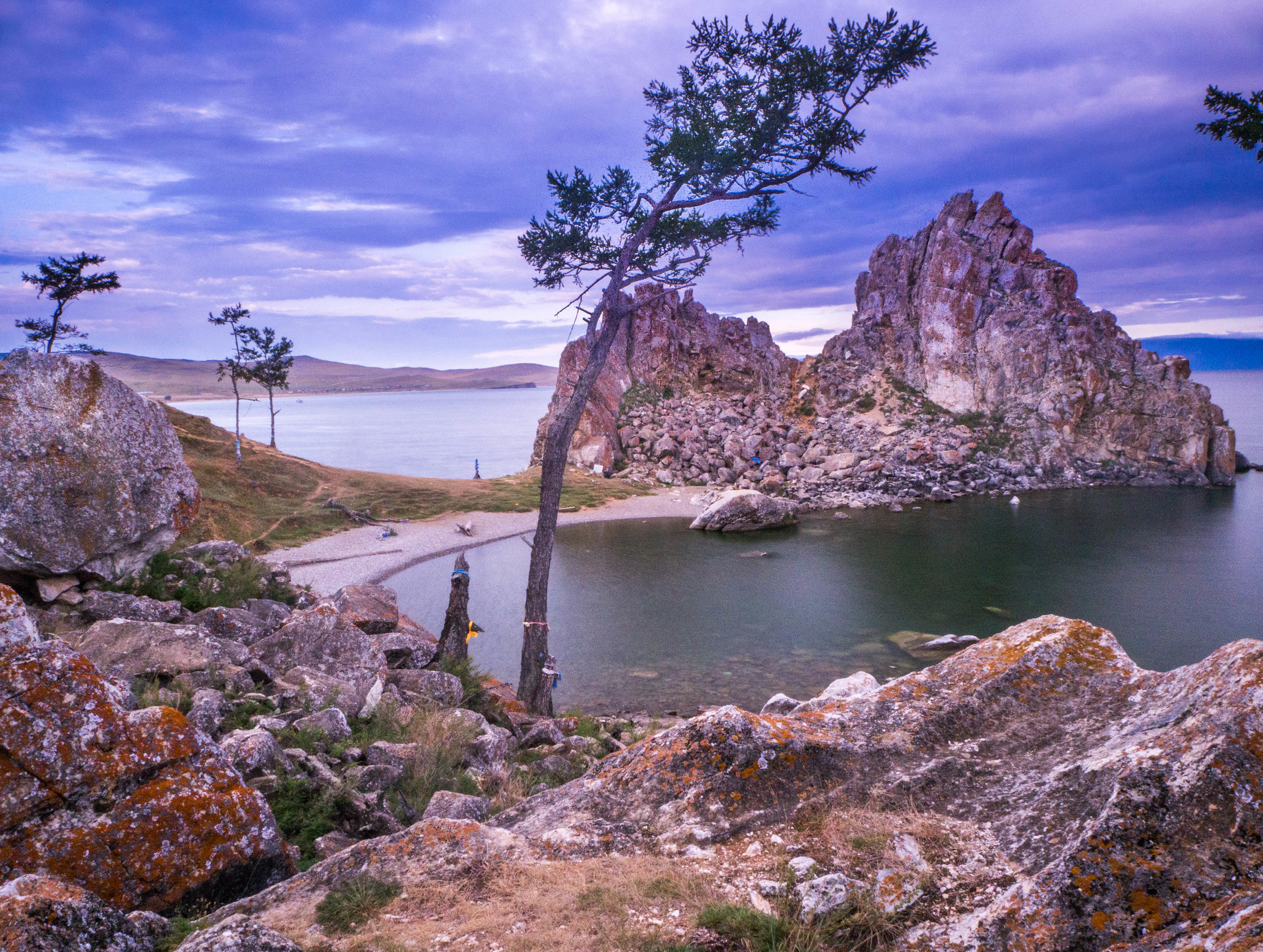 Near the rock, we were fascinated by a harbor, which serves above all for wrecks of old ships. We spend long moments wandering among the ships, some of them covered by graffiti, other by lichens. Besides the wrecks, there are also special sleds in the harbor. Their construction contains a place for a small fireplace and is able to carry up to ten people. For a while, we didn’t understand its purpose, but then we realized that the ferry that carried us through the canal between the island and mainland operates only 8 months a year. In winter, almost the whole lake and the Olkhon gate are frozen, and people need to get to the mainland by horse-drawn sleds. 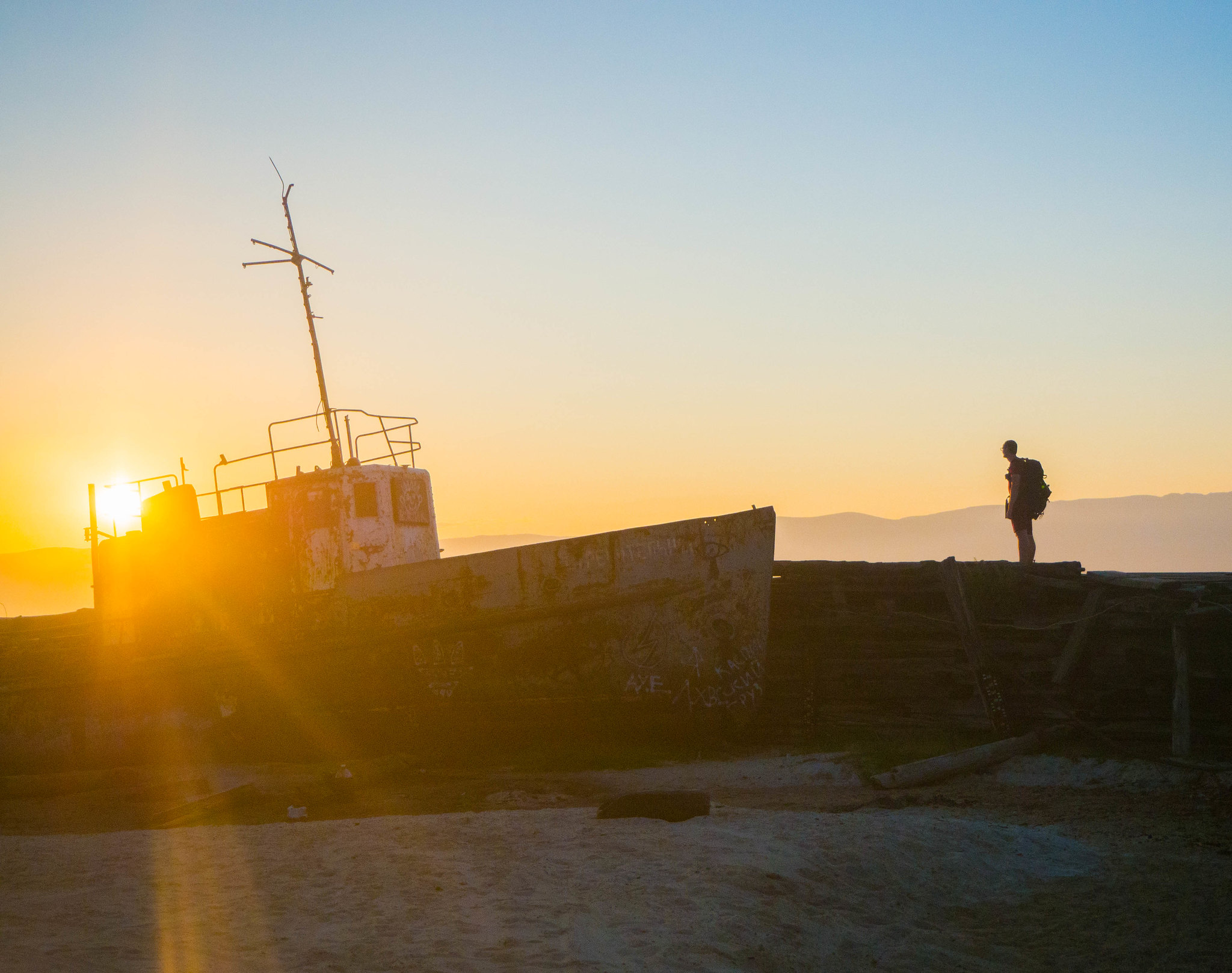 After sunset, we move to the small town and its restaurants. Baikal has its own culinary specialty. Baikal omul is a small fish that lives only in its clean waters, and the restaurants attract you to taste a local delicacy. It is prepared in all different ways – fried, sun-dried, in a fish soup. But the fish is best smoked served with kvas or beer.