Trans-Siberian railway – Part 3: Climbing in the middle of Siberia

Stop # 3 took us to the Stolby Nature Reserve located in the middle of Siberia. It is situated close to the city of Krasnoyarsk and its main attractions are syenite rocks, from which the area earned its name. Nature made these almost 200 rock formations look like people, animals and mythical creatures, some of which are bizarrely close to reality.

In the heart of Siberia

The beginning of our stay in Krasnoyarsk was marked by results of the meal we ate at our previous stop in Ekaterinburg. Food is good and relatively cheap in Russia, so we never hesitate to put unknown delicatessen into our mouths. It is not always worth it, and that was the case of the last dinner on the European continent. But the advantage was one – nausea weakened us so much that we slept through the 36-hour journey on the train. 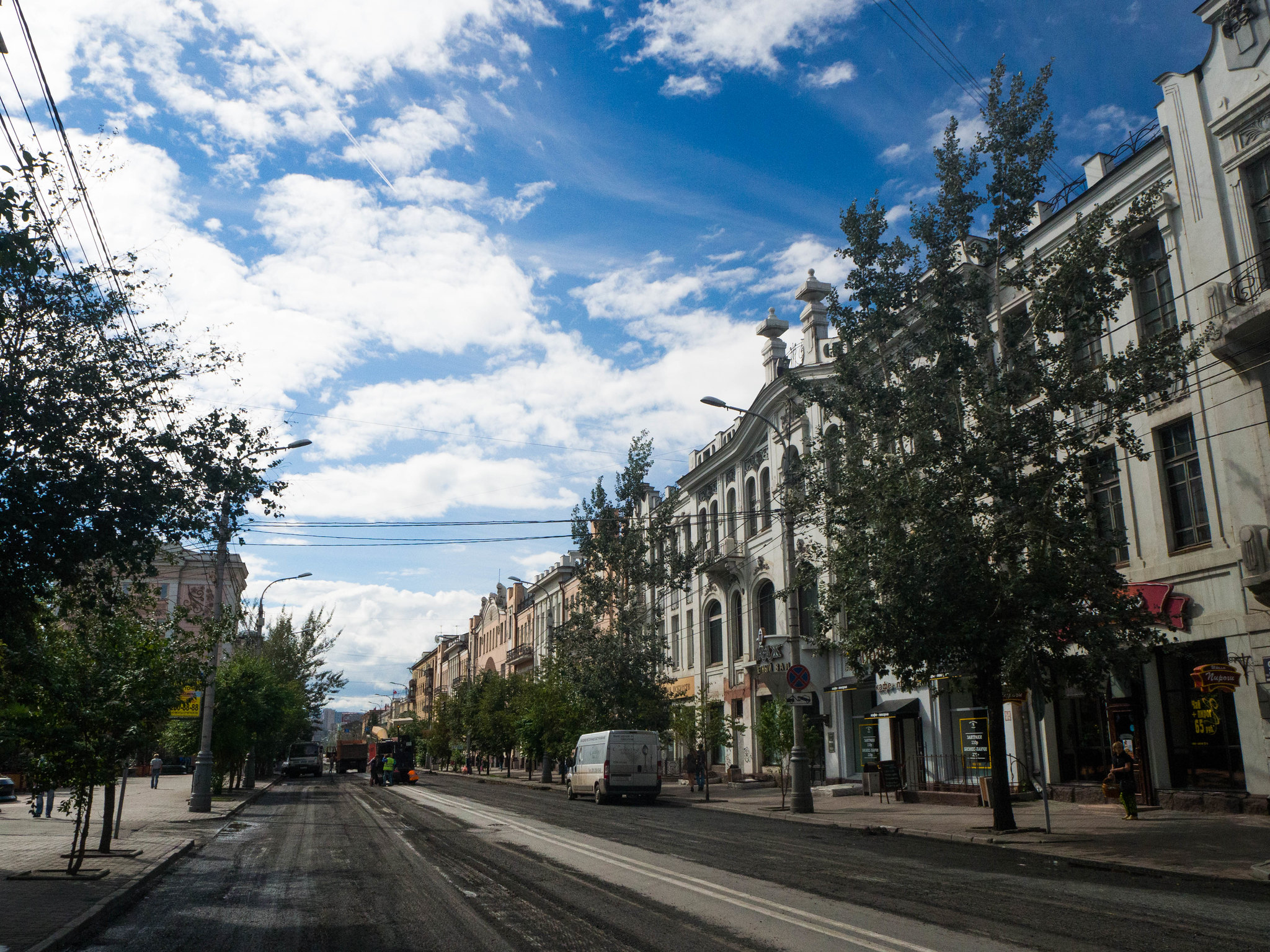 We didn’t want to stay long in Krasnoyarsk. The city, founded in the 17th century by Cossacks on the Yenisei river, was used for deportation of unwanted people and the opposition in the past. The largest number of gulags was concentrated in its surroundings, so the government had no reason to invest in it.

A long way to the park

City bus to the park runs directly from the main train station. We happened to be here on Saturday morning and witnessed a train full of soldiers who came home for the weekend. Joyful cries of girlfriends and weeping eyes of mothers are something we know only from old movies.

The buses in Russia are very old. There was an explosion in the engine after 15 minutes of our ride and a dark smoke started to escape from the rear of the vehicle. Well, none of the passengers seemed to worry and the driver has not even noticed it and drove us to the final station. 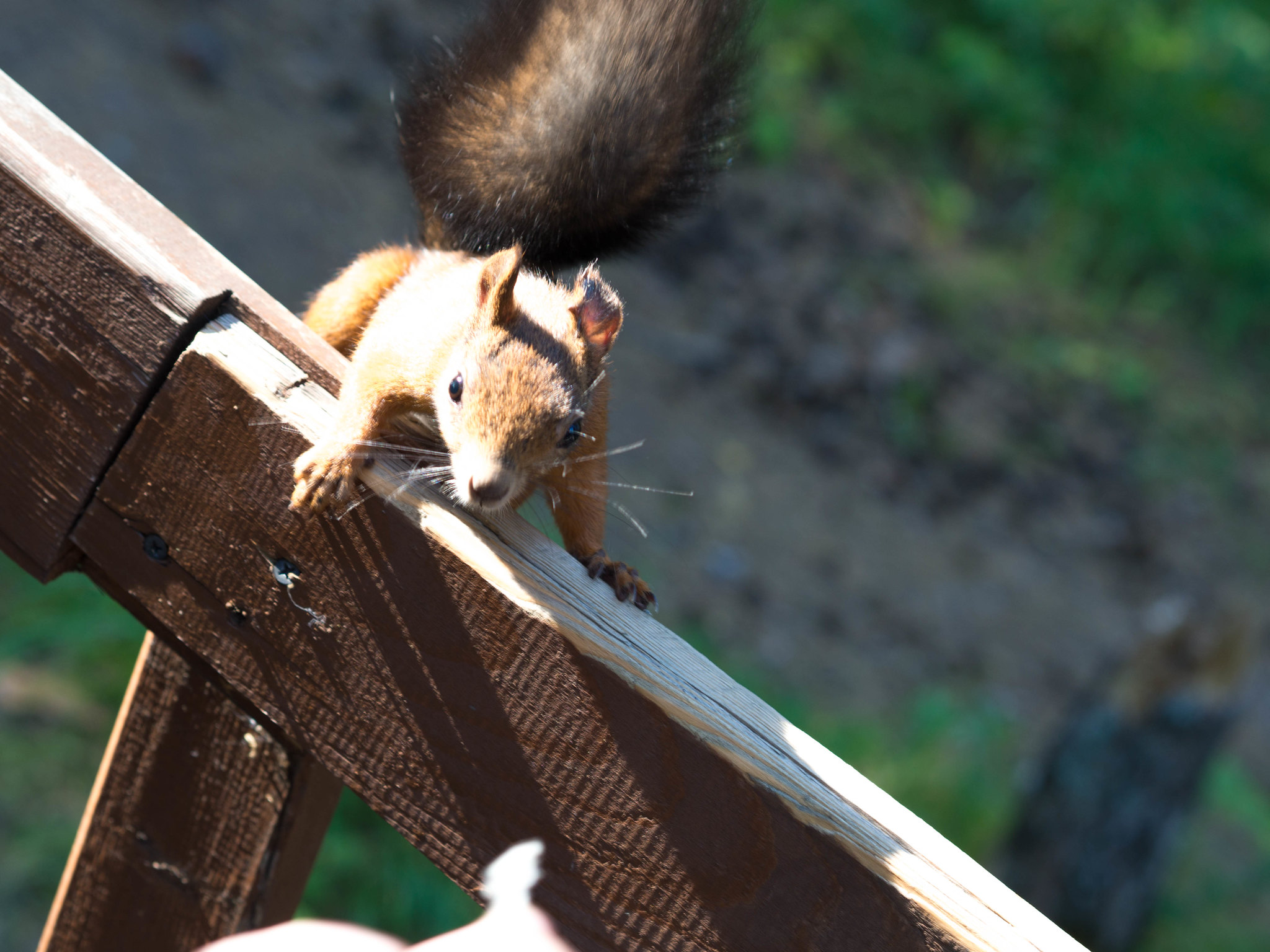 We got off at Children’s amusement park, from where a cable car took us to the entrance of the reservation. We expected at least an information table. Instead, only a wooden gate, faded map that did not show distances, and how-to-survive-a-bear-attack guide welcomed us. Knowing that an eye contact will not win the bear’s love, we took a path towards the reservation center. We didn’t know how far the second gate was, we just hoped that one liter of water on a hot day like this would be enough. After two hours, the bottle was empty and all our hopes of finding water were lost, we squeezed all the juice of our last tomato and kept going. The Russian tourist marking never stops to fascinate us. Every 200 meters we met two arrows: straight – central Stolby and back – cable car. Only the distance to either side was missing.

In the end, we got lucky and the Central Stolbs opened before us. Rocky family – Grandmother, Grandfather, and Granddaughter watched over us. We walked under a stone, which would according to a legend fall down only when the biggest sinner stands under it. For a moment, Dom even considered climbing a rock called an Elephant, the most popular one for bouldering, but we called it a day after all.

On the top of Stolb

On the next morning, we returned to the park and found maps that were actually showing some distances. With water supplies on our back, we were deciding which path to choose when suddenly, a boy from the camp we slept in asked us where we’re headed. We admitted that we don’t know yet.

“We are going to the second stolb, come and join us.” We exchanged a look say why not. Alexei is leading a group of about 7 children learning how to climb. Before we get to the hilltop, there are streams of sweat on our foreheads. Underneath the rock, Alexei explains to children the basic rules for behavior on the rock, and we pay attention as well. The second Stolb is an 80-meter-high pillar made up of smaller stones, making it easier for us to get up, but still with slight difficulty. We are not using any rope to protect ourselves, even though in certain sections a downfall would be certainly deadly. To a question, if he is not afraid of the children’s safety, Alexei only smiles: “Just a little.” But the view from the top of the second stolb is worth the climb. We can overlook the whole reservation, taiga, and the remaining pillars. 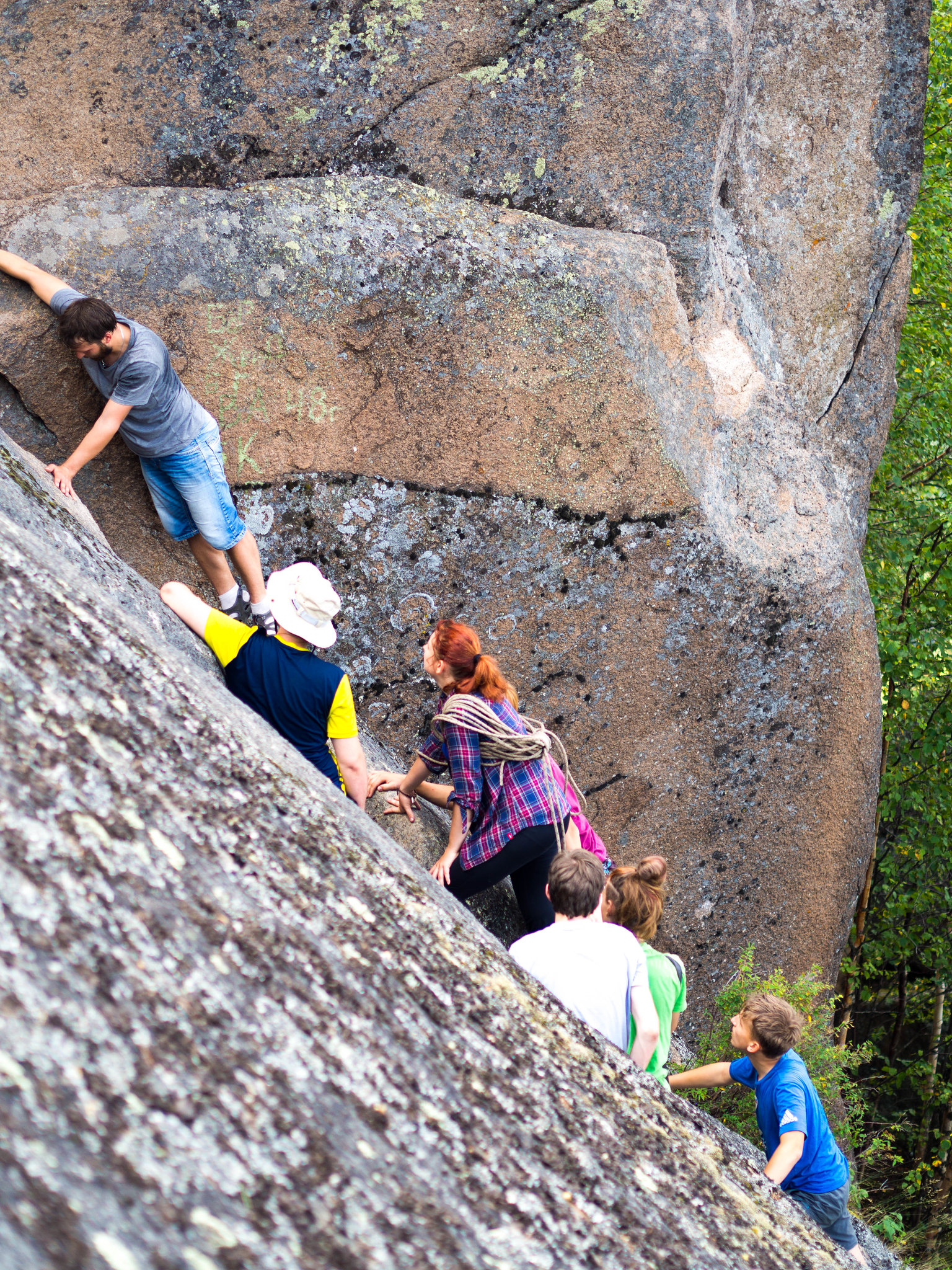 Our guide is not calling himself a climber, but a stolbinist. The history of Stolby reserve is difficult, during the 20th century stolbinism was forbidden for a while and regulated. Also, the area was used by guerrillas. Fortunately, the situation is already different and the success of Russian mountaineers in the climbing championships has also contributed to the development of this natural reserve. Few times a year, slacklines are stretched between the peaks of the rocks for those who dare to walk them.

The stolbinists love their park. They go in even during periods when it is closed for tourists because of the presence of bears, and they sleep on the rocks and create shelters. Apparently, they also have a piano in one of them.

We are counting scars and bruises from our adventurous trip to the rocks. Today, the weather is supposed to be cloudy, so we leave for last short visit to the park early. Besides nature, we are admiring the rock formations of Kain and Abel, and Manskaya Baba, the largest rock in the reservation. Once again, the map describes the path twice as long than reality. We are starting to wonder whether the Russians do not multiply every distance, and could be that their country is actually not that big. However, we are not complaining about the shorter trek, still, another 7 kilometers remain to the nearest bus stop back to the city. 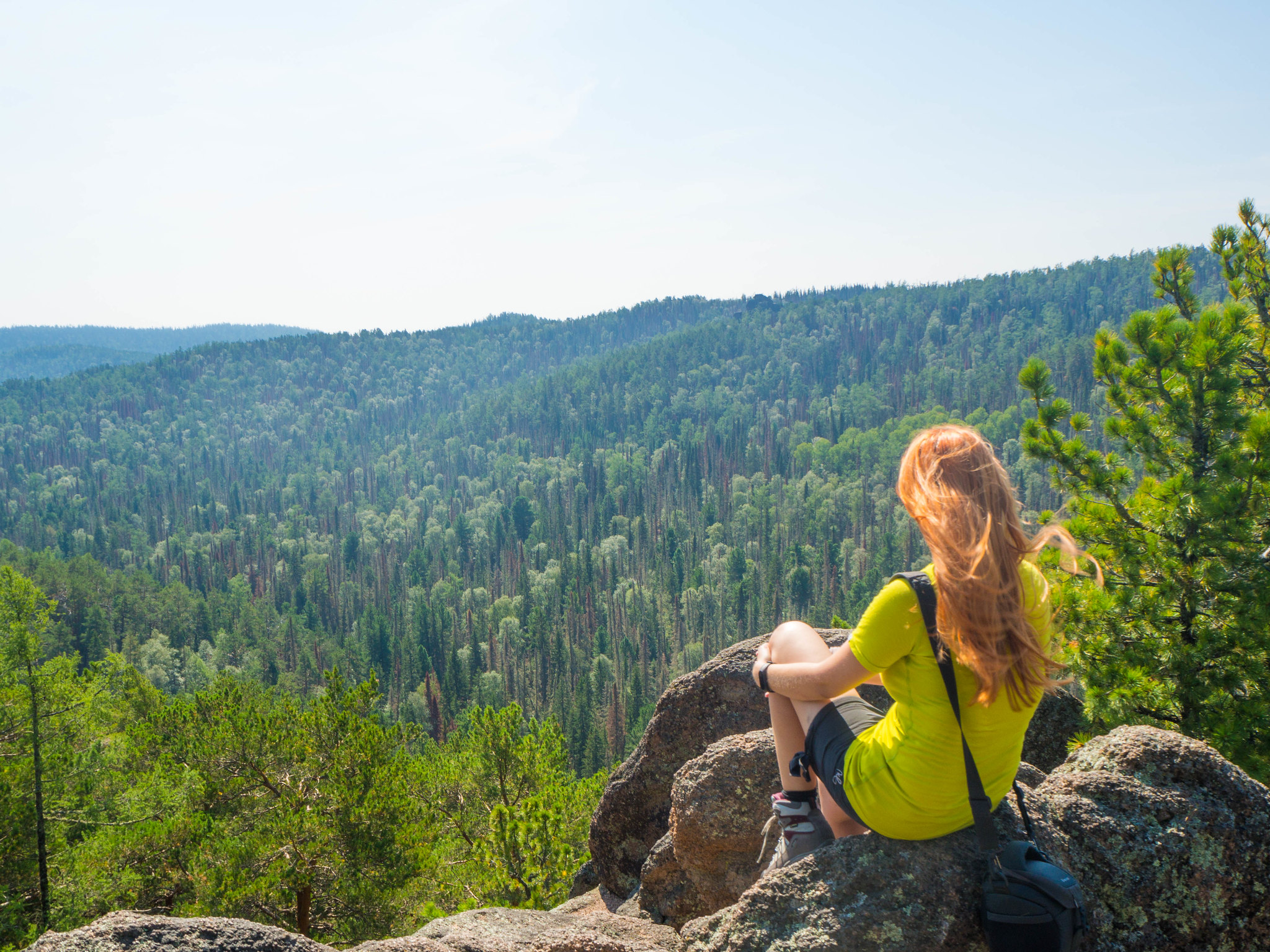 With the first rain, wires of power lines start to sparkle, drops are pounding on the bus windows, and we are witnessing a lot of traffic accidents. “You know, in Krasnoyarsk, the east and west encounter. In traffic, you need either rules or chaos, here it is fifty-fifty, so the stronger and faster one wins.” Our host Ilja explains to us a few hours later. We chose Ilja on couchsurfing because he offered rural accommodation suitable for backpackers. We did not know what to imagine, so we wanted to find out.

Upon arrival at his parents’ cottage, Ilja heads to lit up banya. The Russian banya is very similar to the Finnish sauna. The first mention of banya comes from 945 AD. The leader of the Slavic tribe of Drevlians wanted to marry Princess Olga, the widow after murdered Prince Igor. He sent messengers to the princess to discuss his offer, but she refused to accept them until they take a bath. The unsuspecting Drevlians obeyed. As soon as they were in the bathroom, the princesses servants locked the door and set the room on fire. Thus, the princess had her revenge for the murder of her husband. 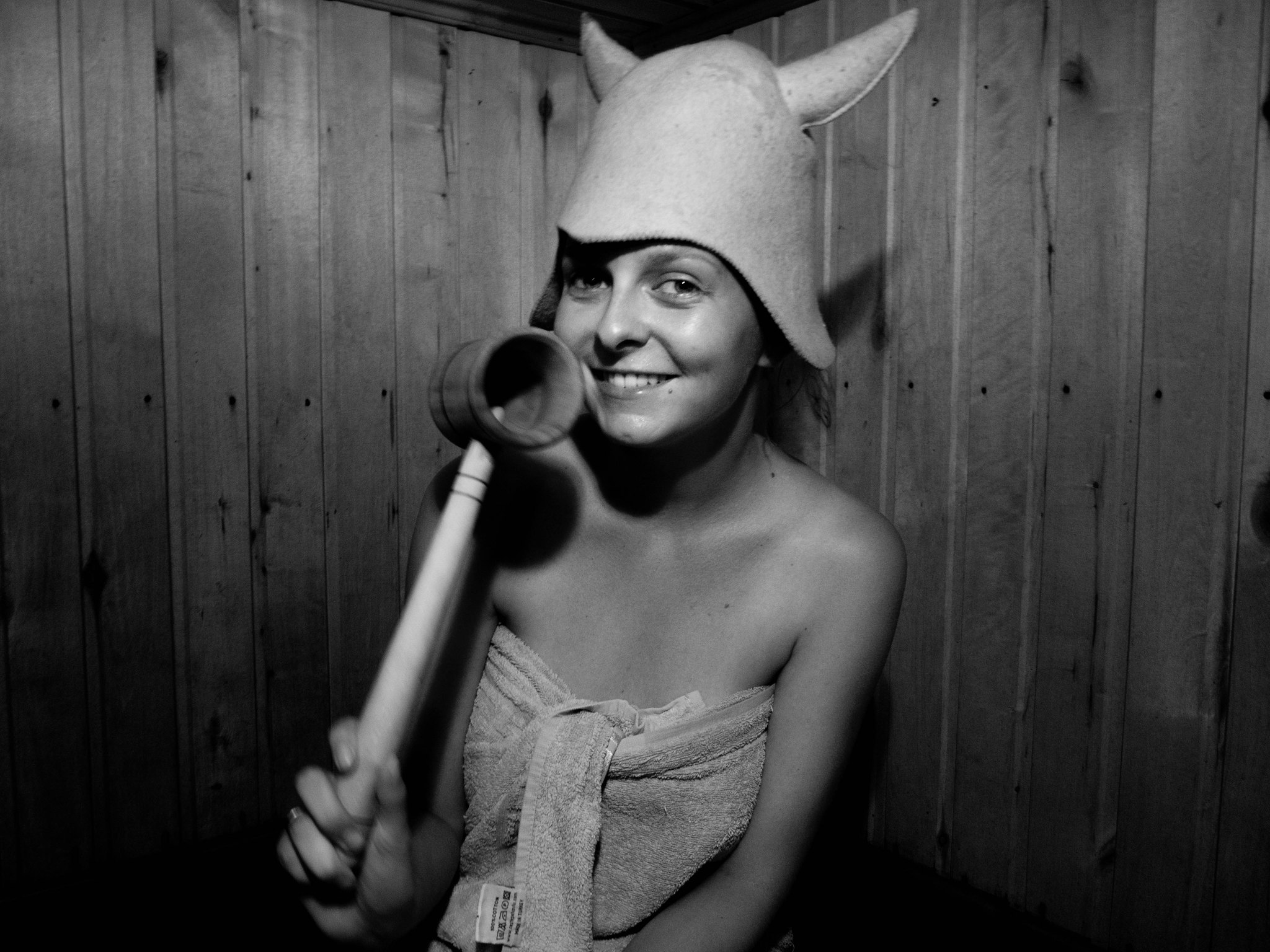 Special felt hats are typically worn to protect the head from intense heat. People like to add aromatherapy extracts to the steam and hit themselves with branches of birch, oak or eucalyptus in order to improve blood circulation.

Ilja also offered us some traditional Russian drinks. Specifically, kvas – a very slightly alcoholic beverage prepared by fermenting the grain, and with his dad, we drank a samogonka – Russian homemade brandy.